Even though this is primarily a fashion diary, I thought it would be a good place to share my experiences from my vacation to Belize.  It was one of the most beautiful places I've ever been to.  The water was crystal clear and the views were amazing.  The week was jam packed with excursions too, which was awesome, although we didn't quite get the time to relax like I thought we would.  So I didn't get much time to lay out and work on my tan, but I'd say it was a fair trade. ;)

Day 1
We arrived in Belize City around 12pm and after making our way through customs and getting our car for the week, we headed down the coast.  We stayed in the small fishing village of Hopkins, which was about a 2.5 hour drive from Belize City.  The village is beginning to draw more tourists and there are a few petite resorts are along the shoreline, with a few more under construction.  We stayed in Parrot Cove Lodge, which boasted Chef Rob's, supposedly the best restaurant among the resorts in the area (I must agree).  We stayed in the bottom part of the beach house, which was right on the beach and had an awesome view.


That evening we checked out Chef Rob's for dinner and then sat out by the beach.

Day 2
Up for day 2 was horseback riding through the jungle in the morning and a night hike through a different part of the jungle in the evening.  While hanging out on the dock first thing in the morning, we saw some local fishermen pull up to shore with lobster they had just caught.  They were making a deal with Chef Rob to sell him the lobster.  After we saw that, we knew where we were having dinner that night! 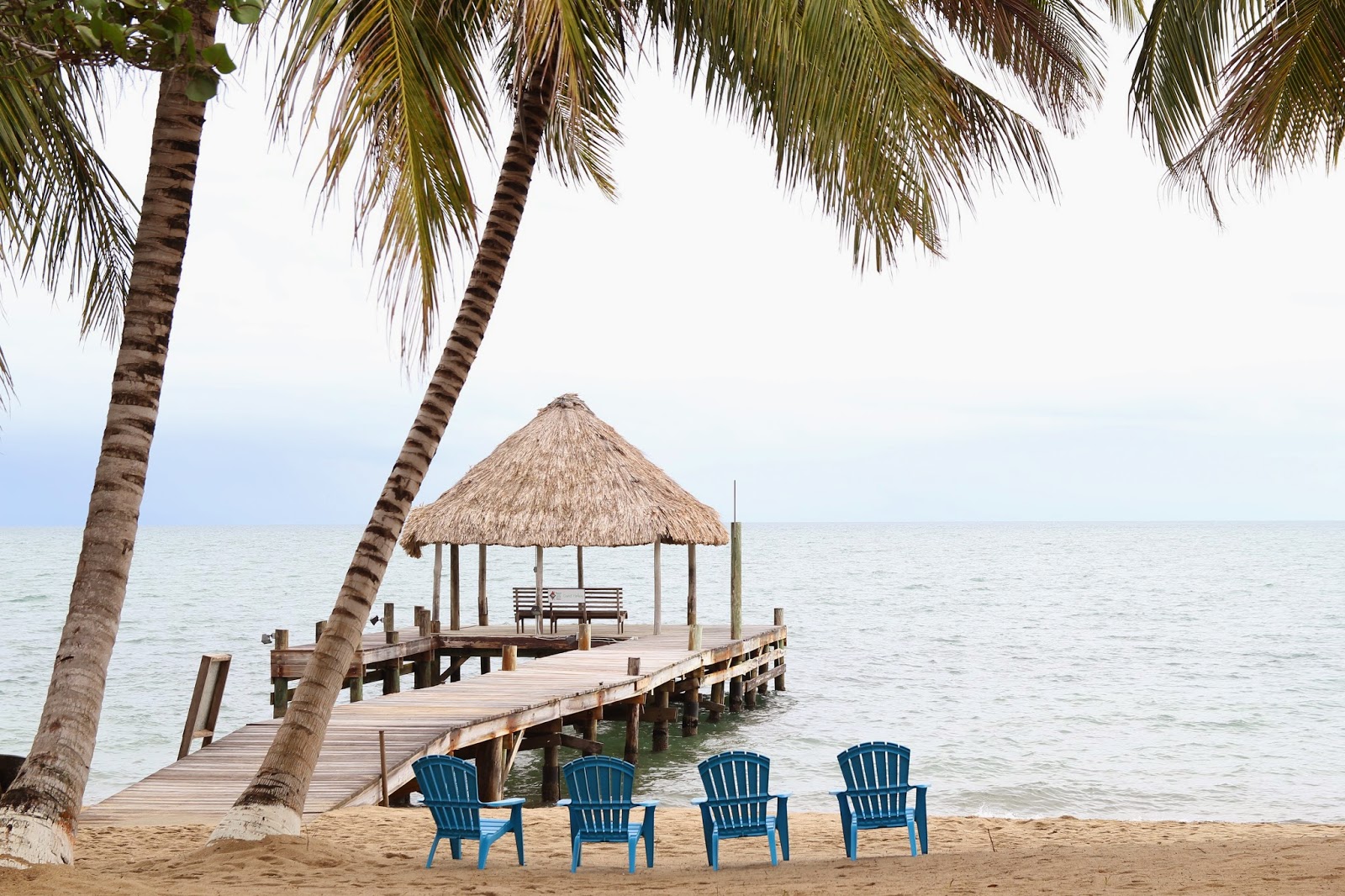 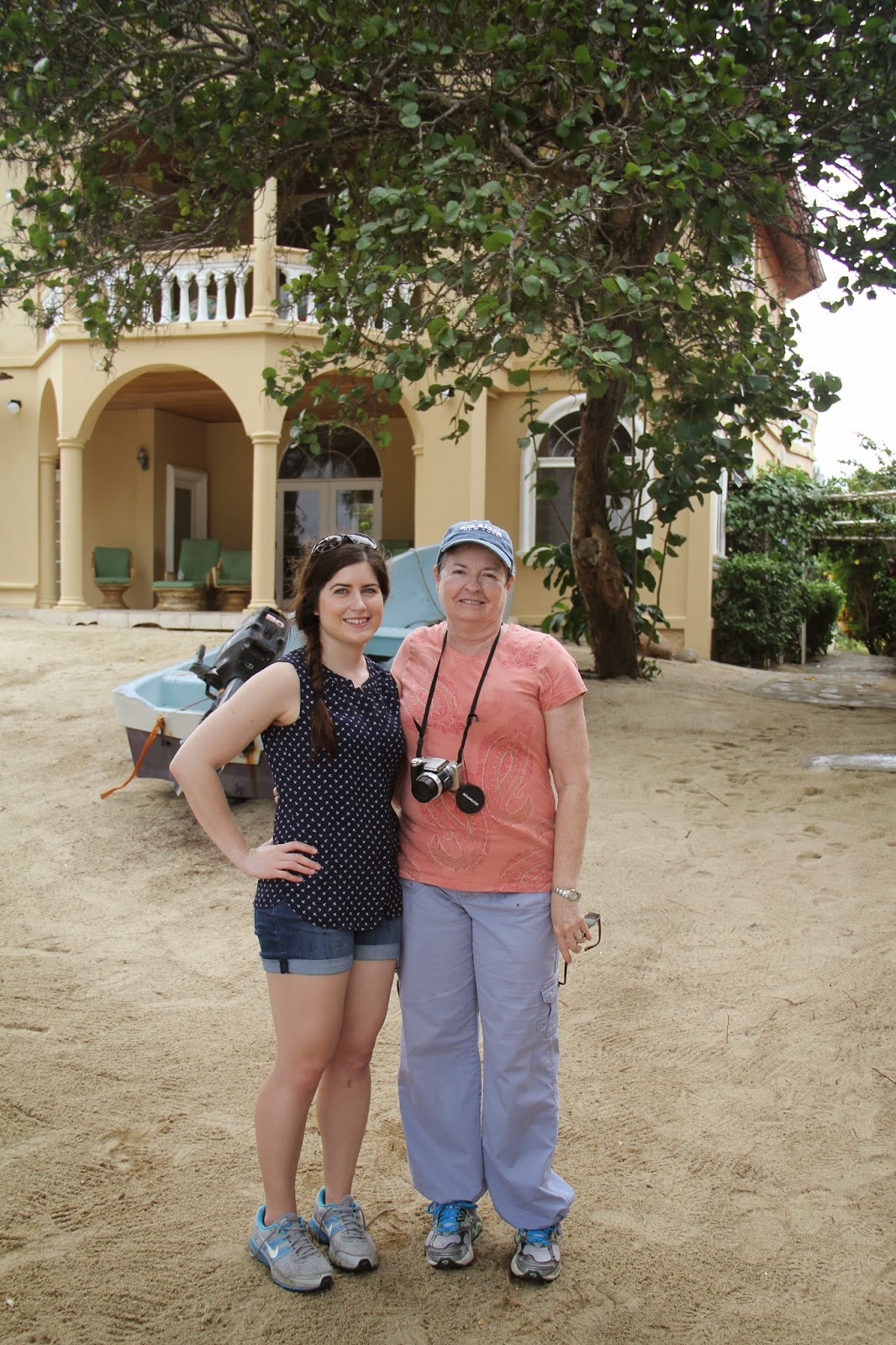 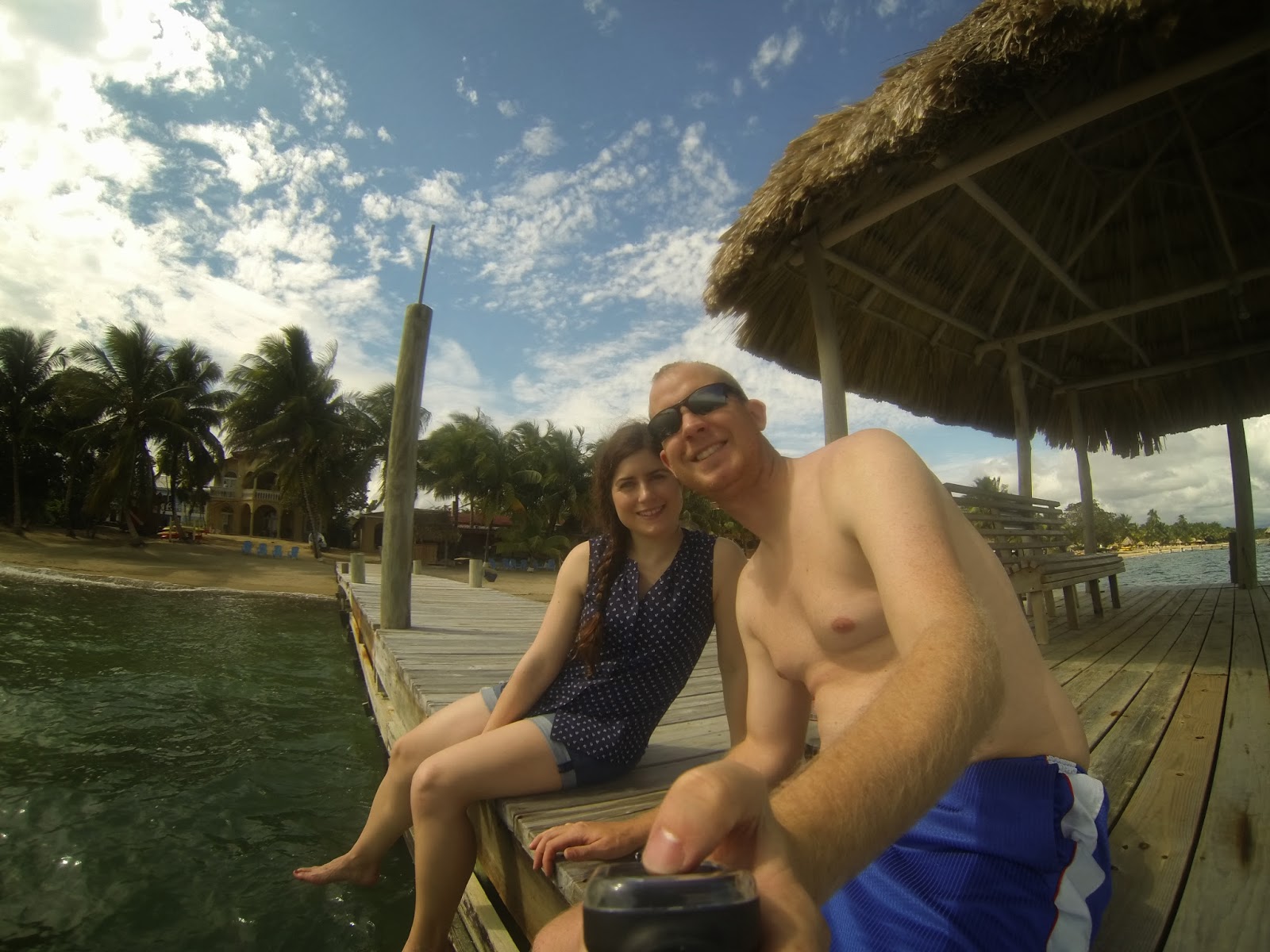 It rained on us through most of the horseback riding, but it was actually nice because it kept all the bugs away!  The name of my horse was Happy Toes but I forgot during the ride and kept calling him Happy Feet, haha.  He liked to stop and eat (and go to the bathroom) a lot.  He also had gas and my hubby (who rode behind us) was not amused. Haha! 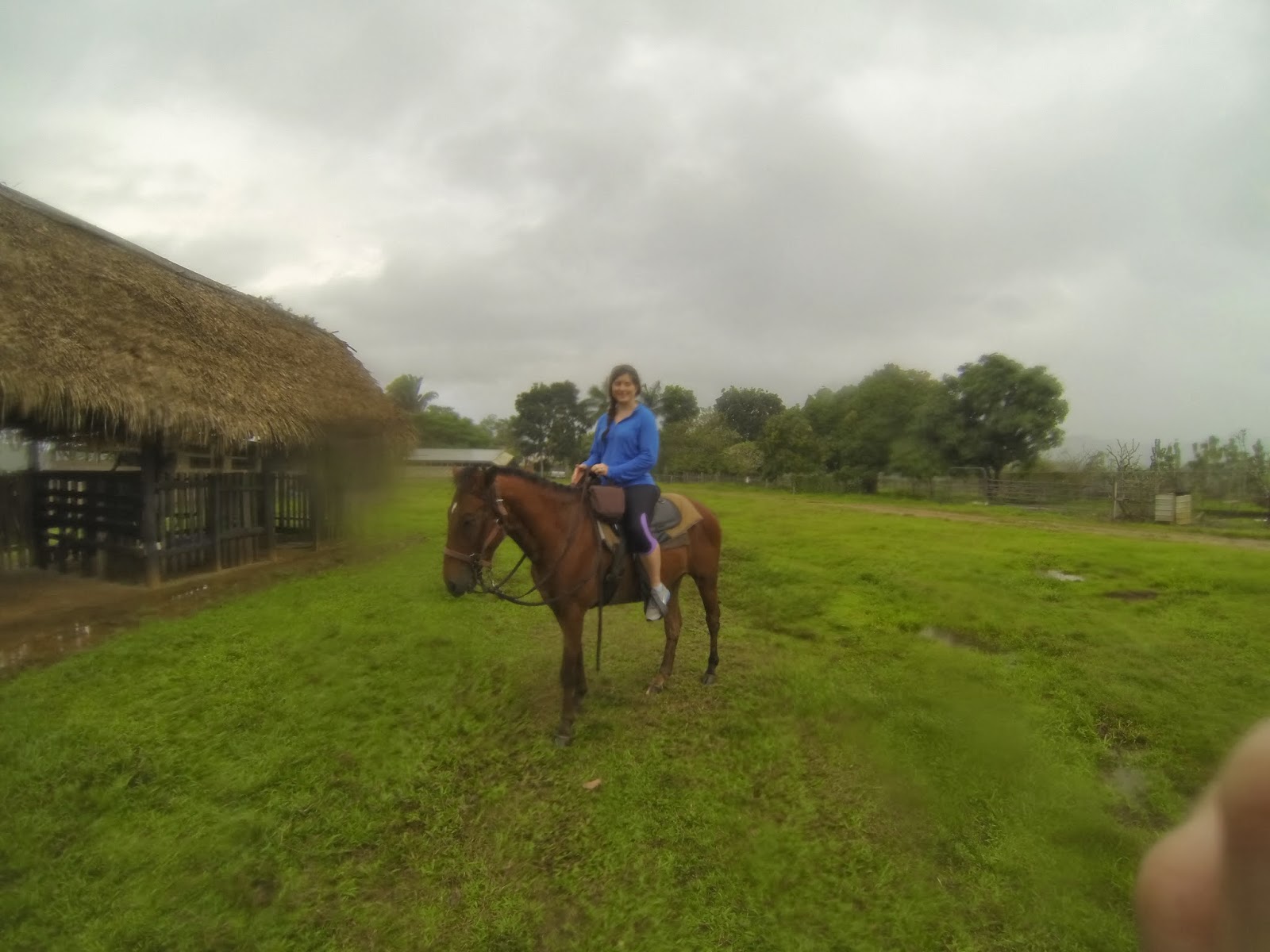 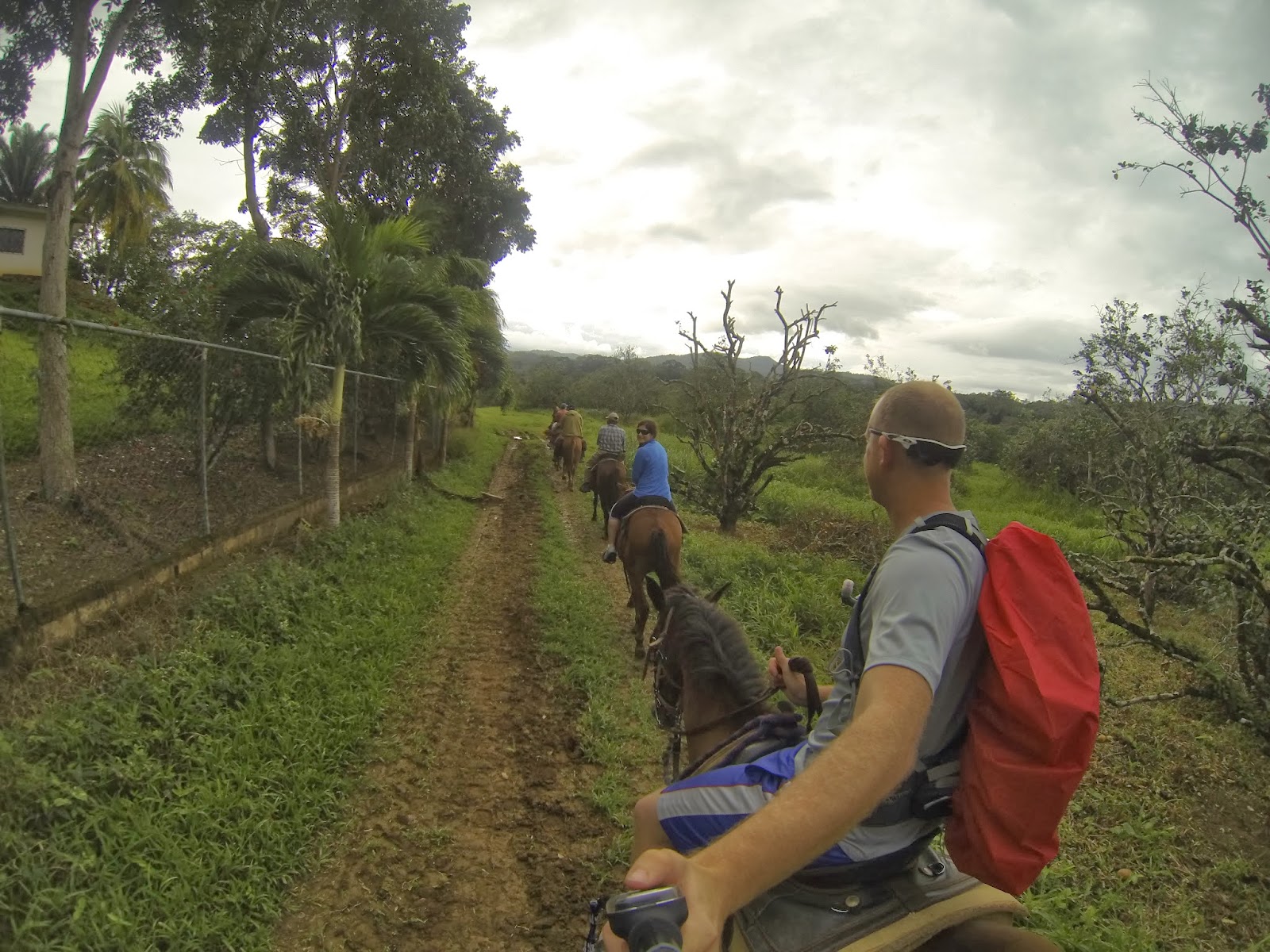 Halfway through we stopped along the river and it had a gorgeous view. 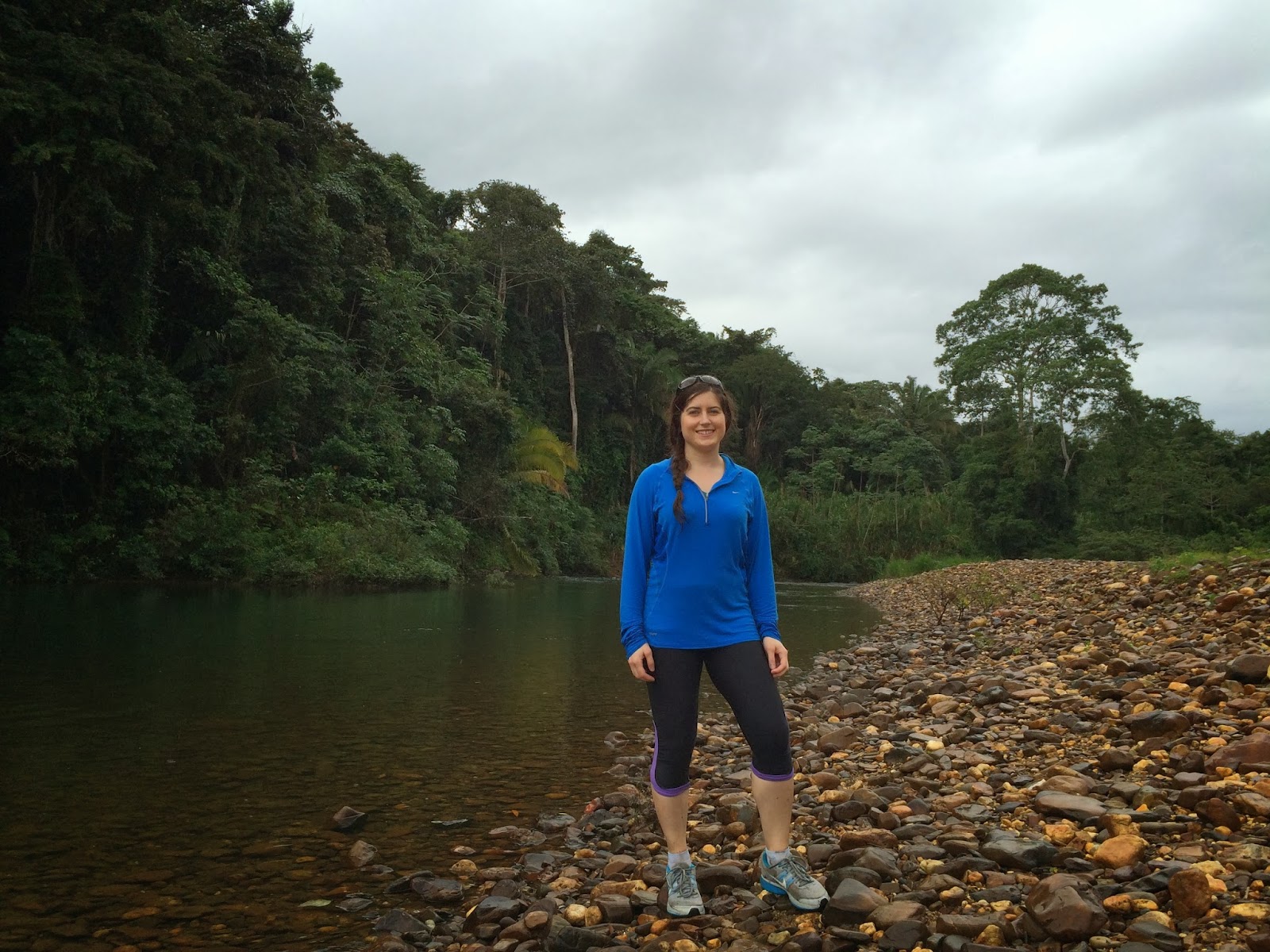 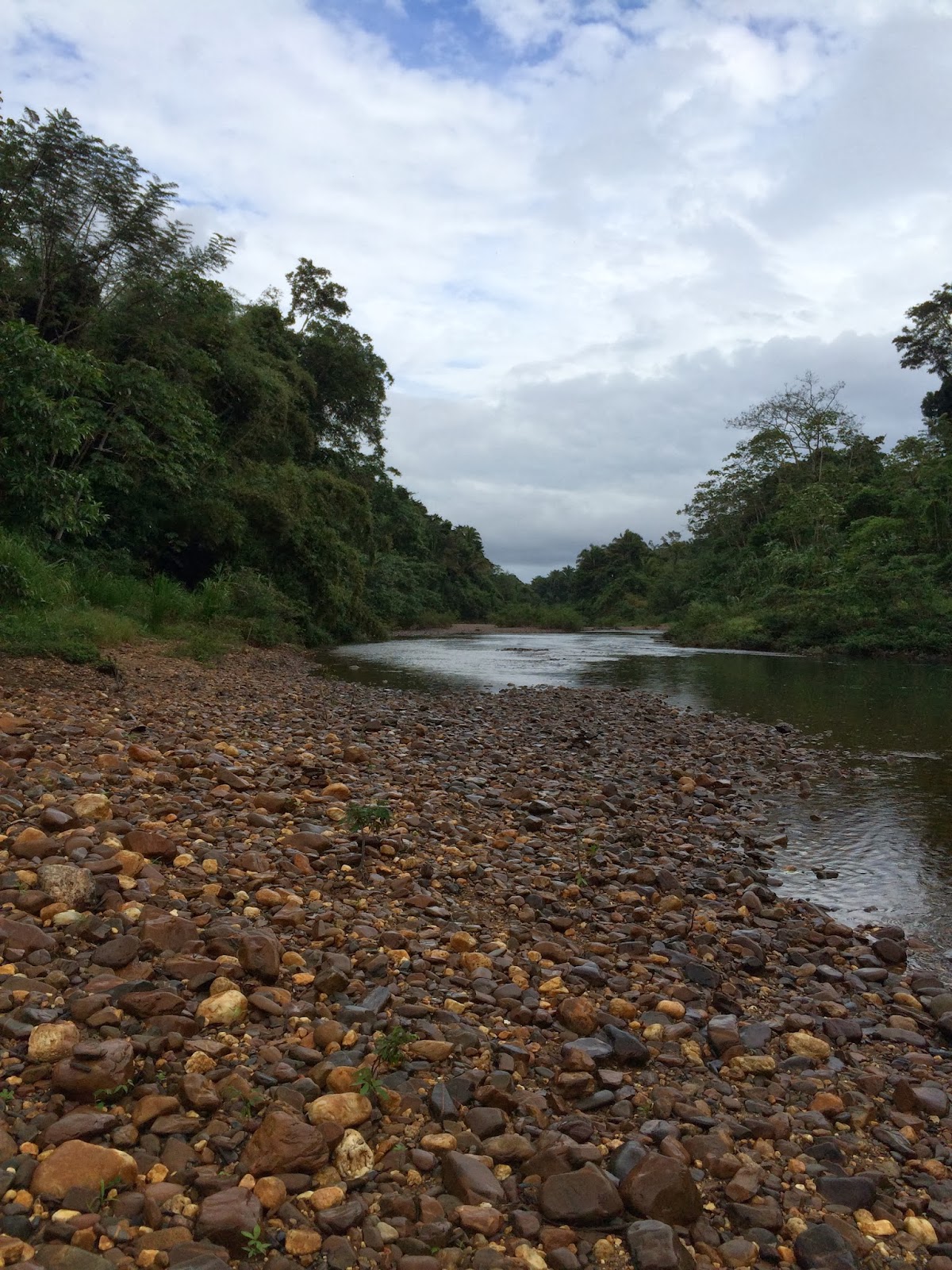 Later we went over to Love On The Rocks (the other restaurant at Parrot Cove, also run by Chef Rob) and ate the freshly caught lobster for dinner.  They serve it to you on a hot lava rock and you get to cook the steak and lobster exactly to your liking.  It was very cool and very delicious! 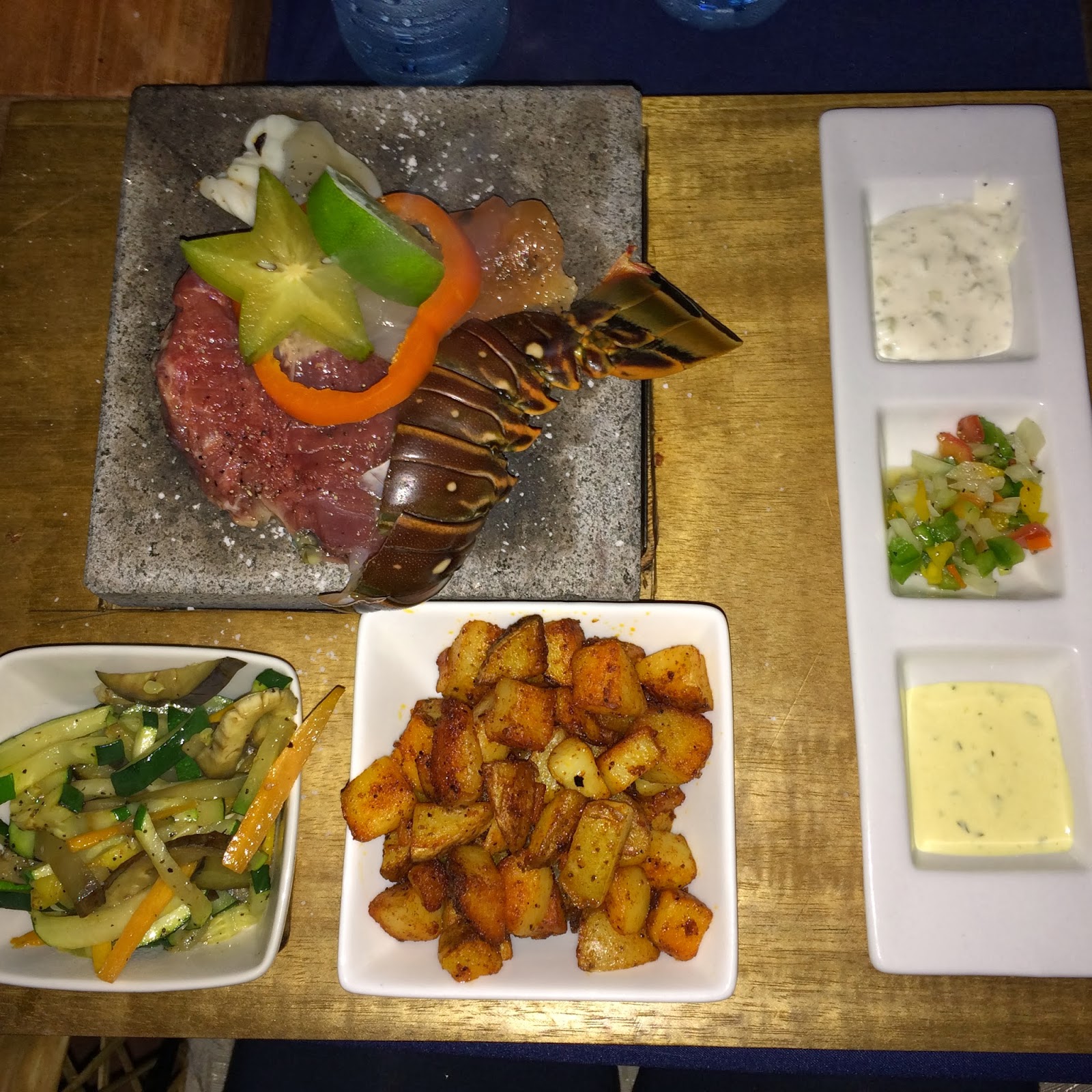 The night hike was fairly uneventful, but there's just something about hiking through the jungle at night with no one else around and only your flashlights as a source of light that is both scary and exhilarating.  We turned the flashlights off a couple times throughout the hike and it was so dark you couldn't even see your hand in front of your face!  We were really hoping to see the elusive jaguar, but we weren't so lucky.  We did see lots of leaf cutting ants, a frog, a scary spider, a paca (an opossum like creature), and the most exciting, a kikachu up in a tree.  On the drive into the jungle we saw a fer-de-lance (very very poisonous snake) cross the road.  Our guide, Julian, was so relieved that we were in the car because those snakes are nothing to mess around with!

Day 3
Day 3 was our snorkeling and fishing excursion.  I had never gone snorkeling before so I was very excited!  It was chilly in the morning and the water was a little choppy, so we were hoping for it to clear up by the afternoon.  Our guide today was named Luckie and his deckhand was Marlin.  It was neat to see them work together because Marlin was a deaf-mute.  Luckie said that Marlin loved the sea and was a hard worker, so it was great to see that he gave him the opportunity to work with him. 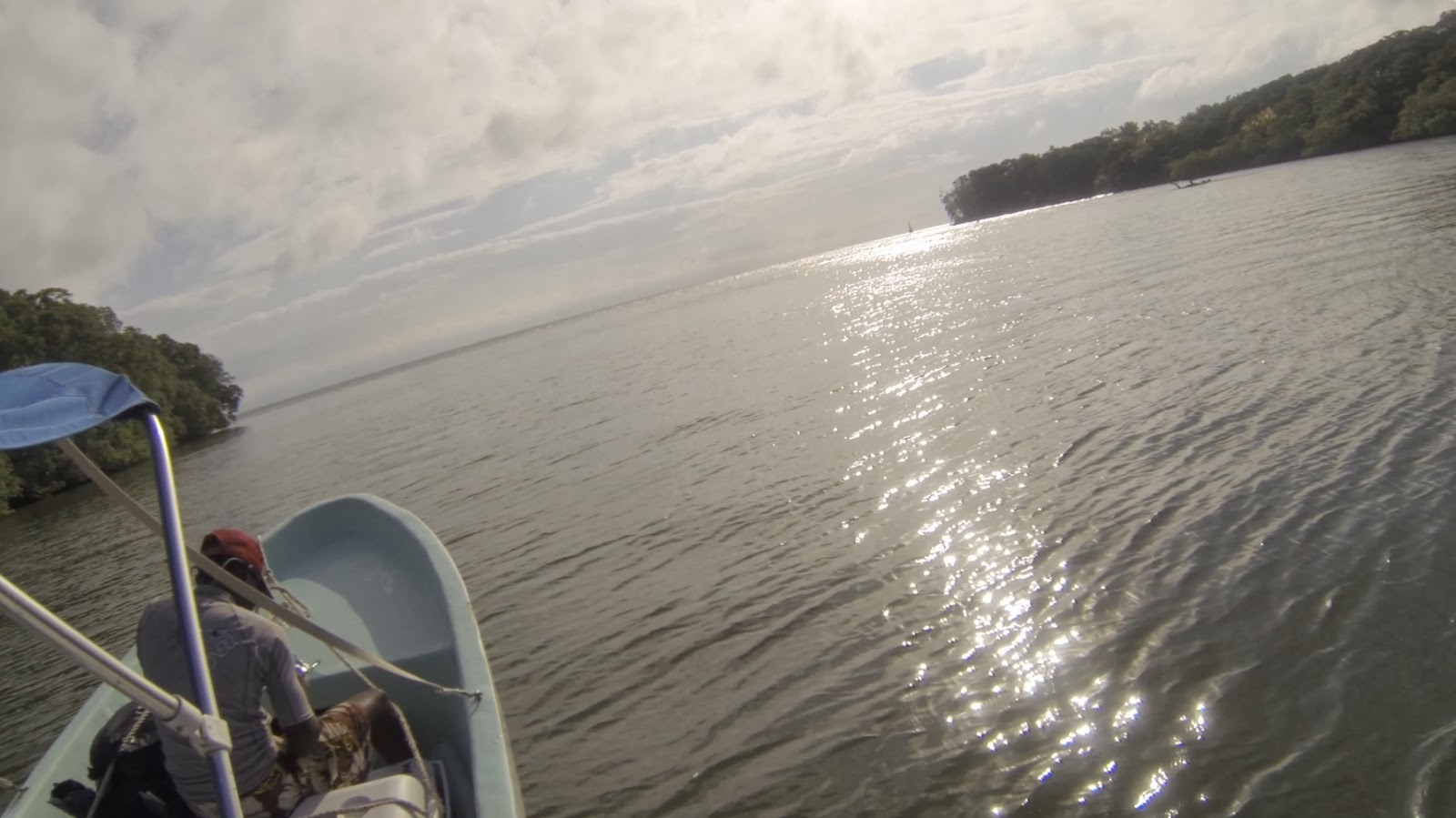 We had issues catching bait fish ~ they were too small for the net, so Luckie decided to catch some baitfish when we went snorkeling.  Pelicans were all around us and they kept diving headfirst into the water to catch fish.  It was neat to watch!

The water was a little chilly for snorkeling, but once we were swimming around and taking in the views beneath the water, we didn't even notice the temperature.  I was secretly hoping to see a small shark, but we didn't.  Honestly, I'm not sure if I could've handled seeing a shark.  I might have freaked out a little!

Luckie was able to dive pretty far down, about 50 feet, and speared a few lionfish to use later for fishing.  He also found a conch that Marlin opened and removed the meat for bait.  We got some cool footage of our snorkeling adventure on the GoPro.  Here are a few stills from the video. 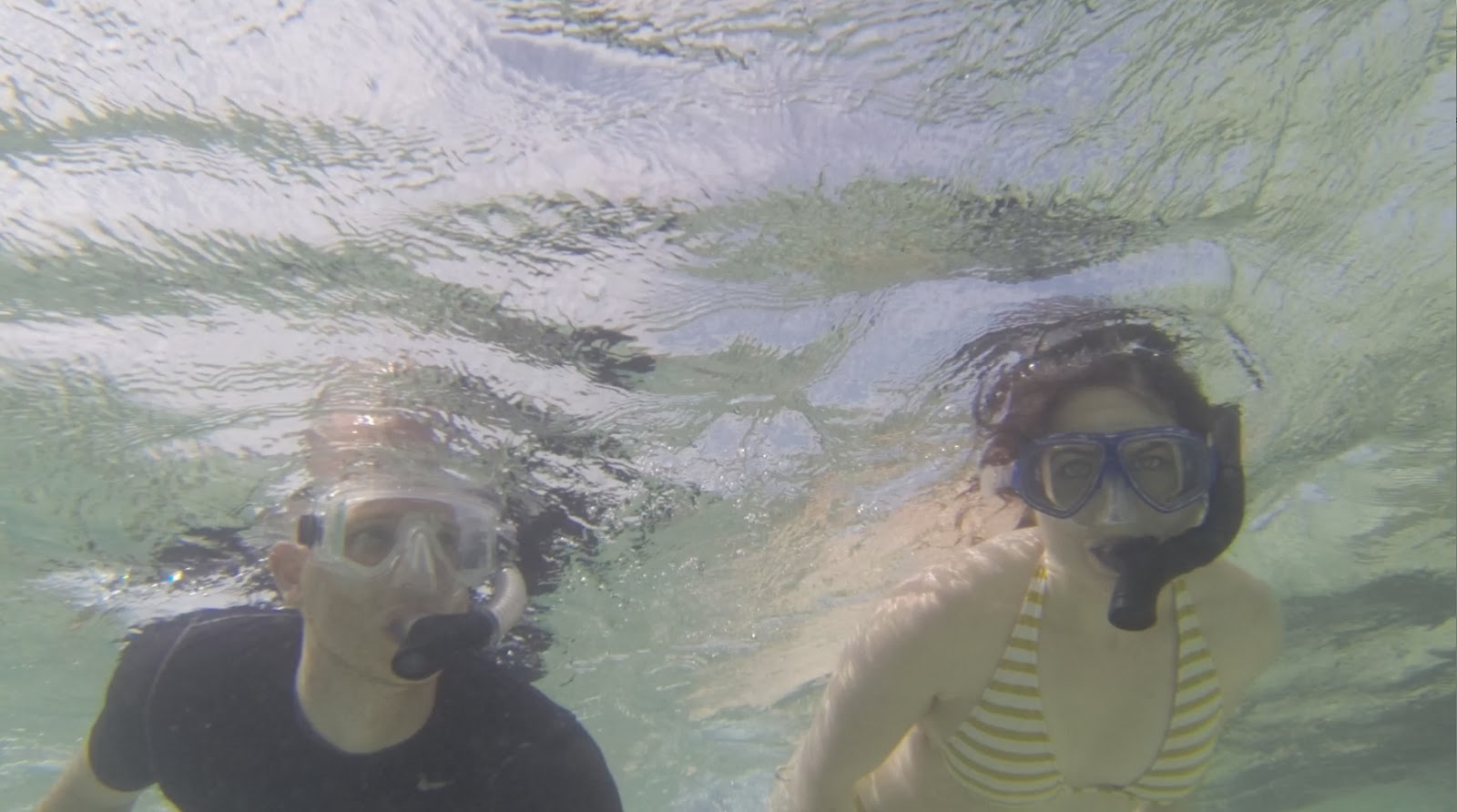 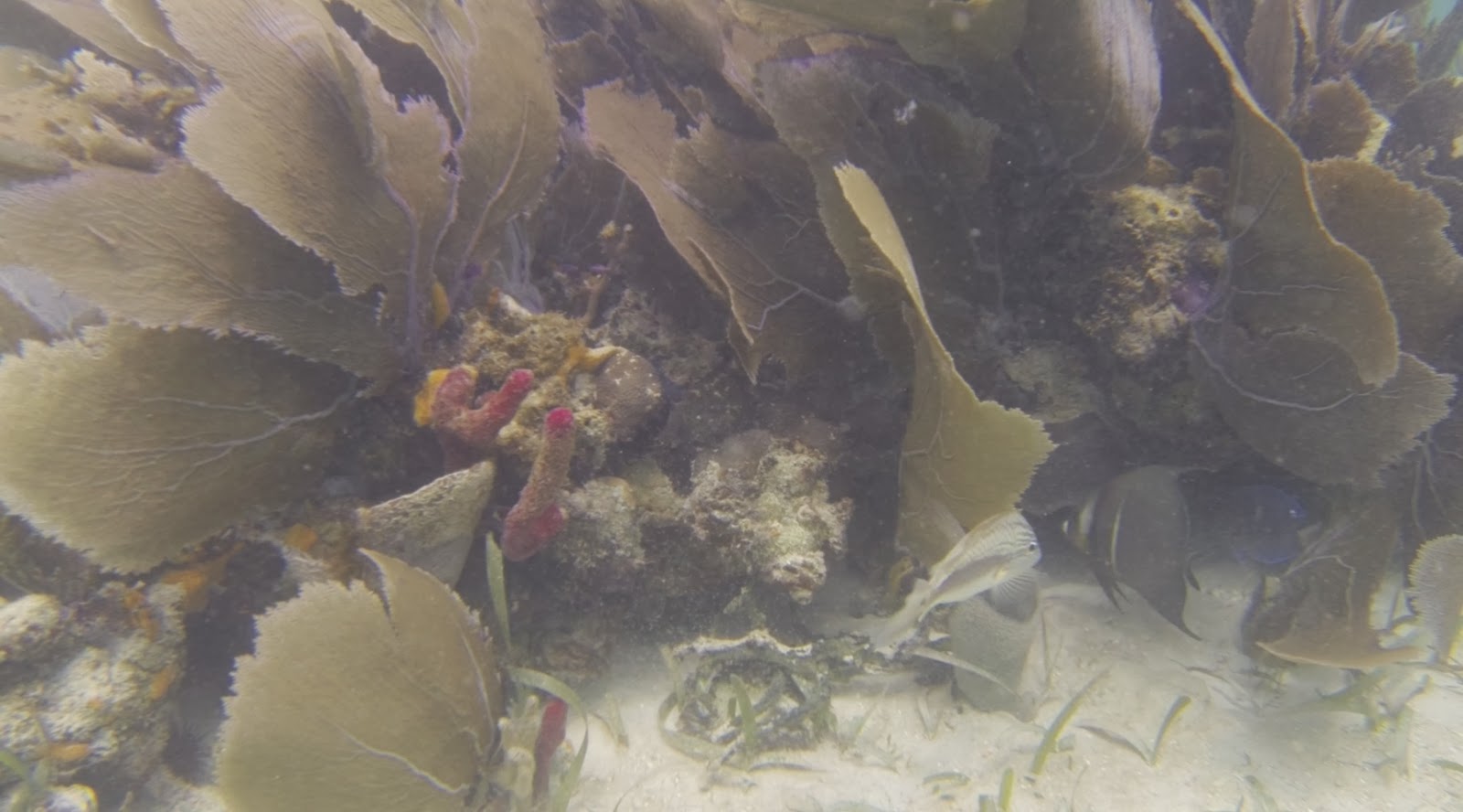 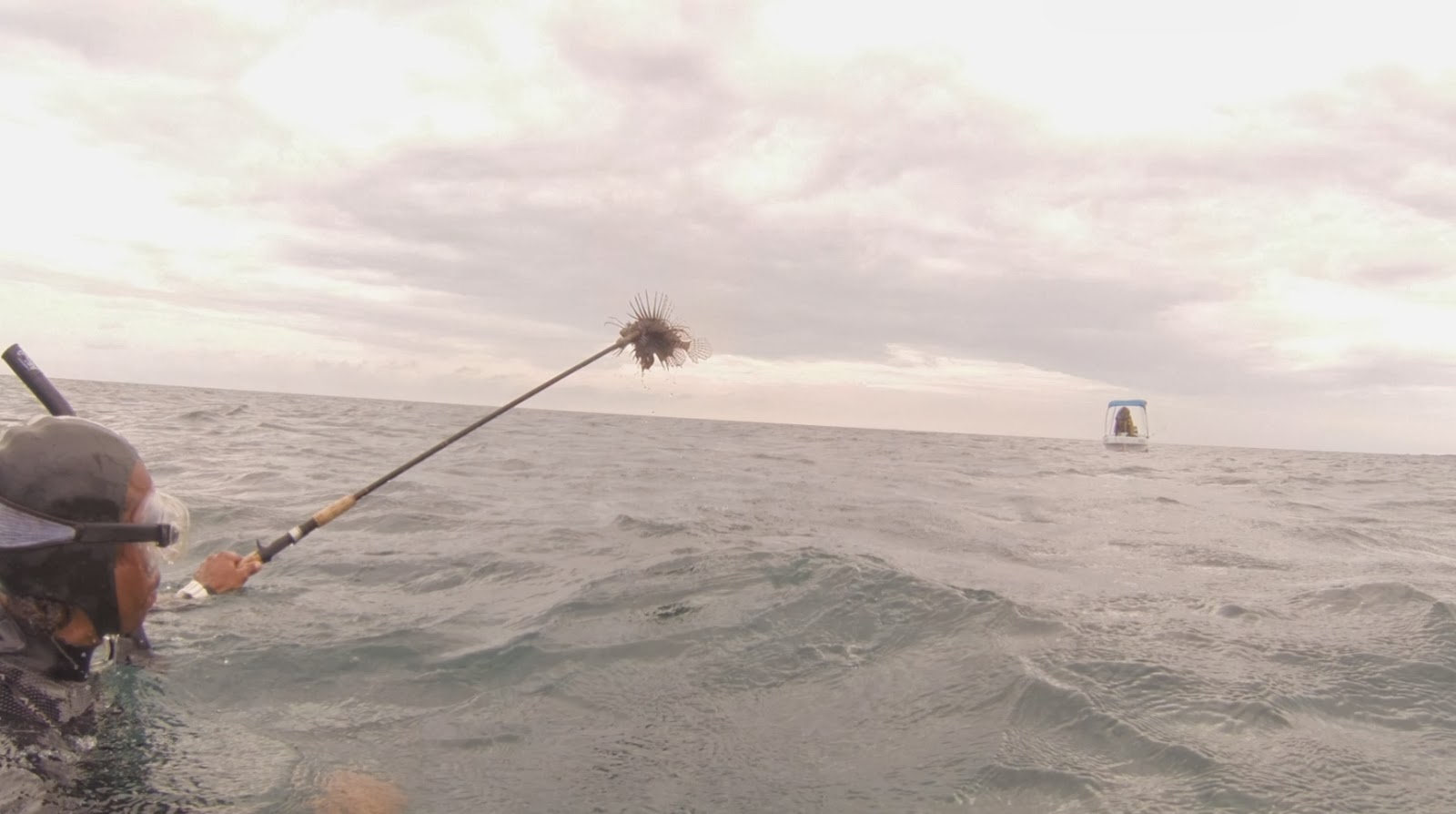 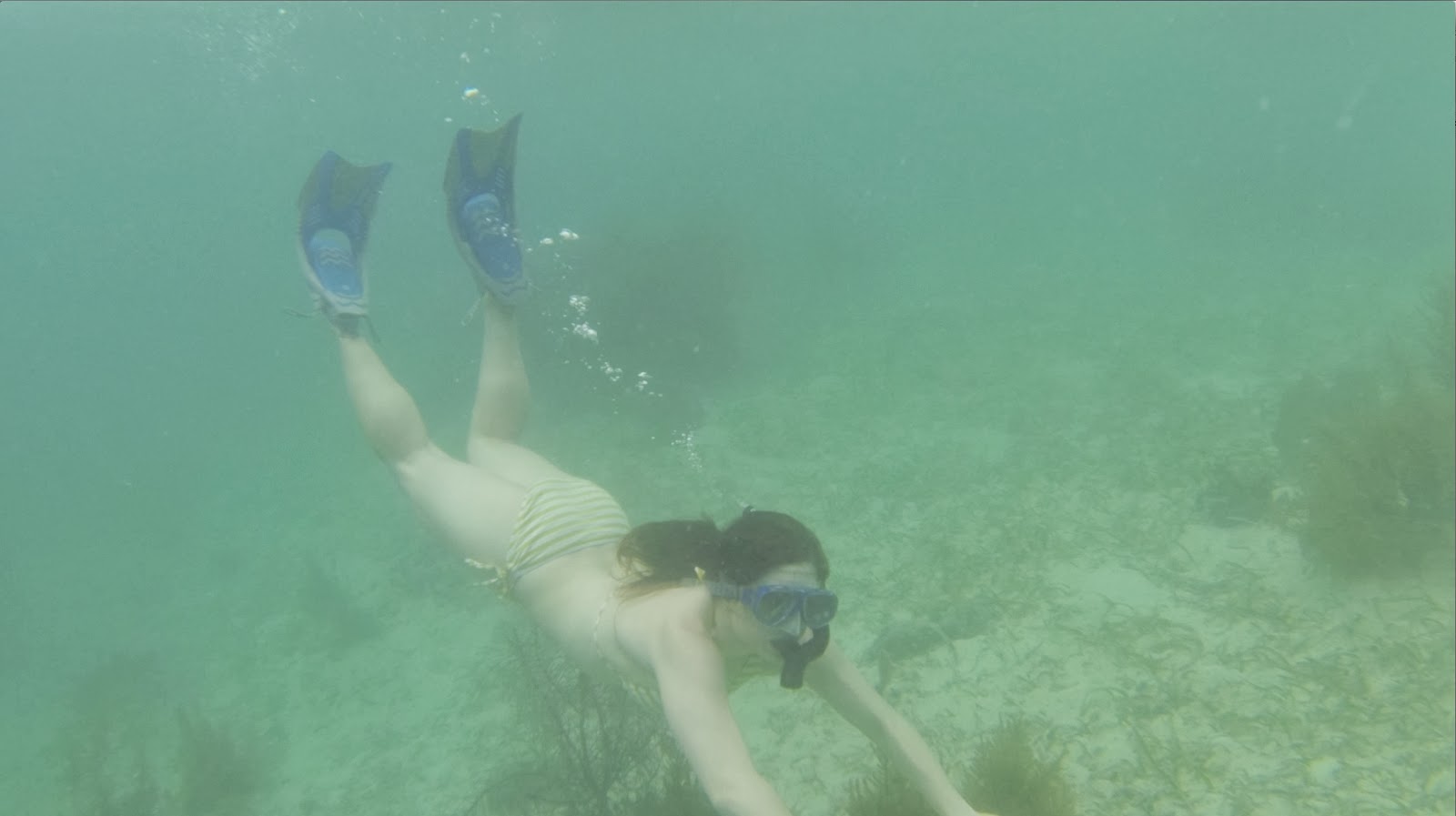 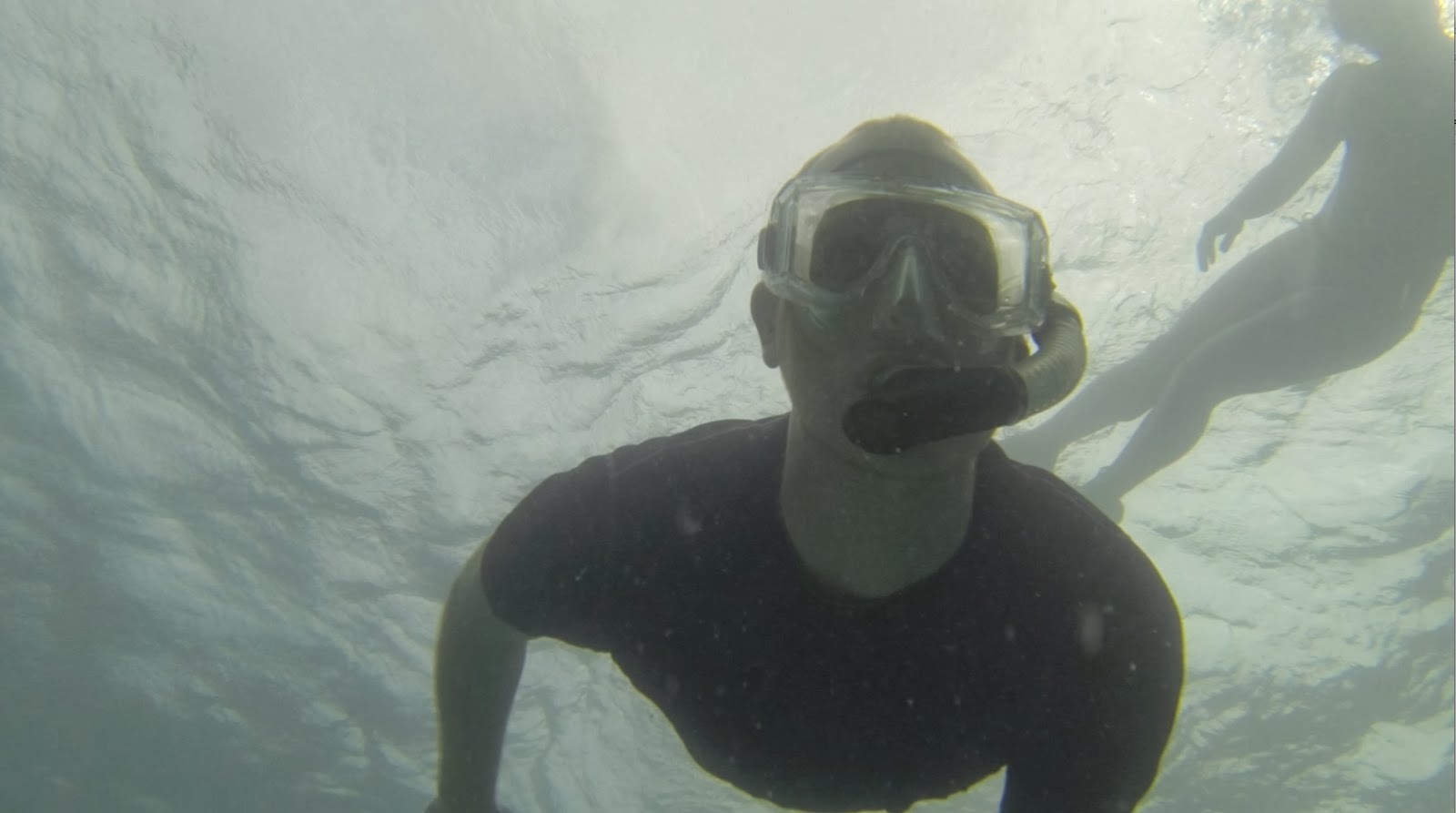 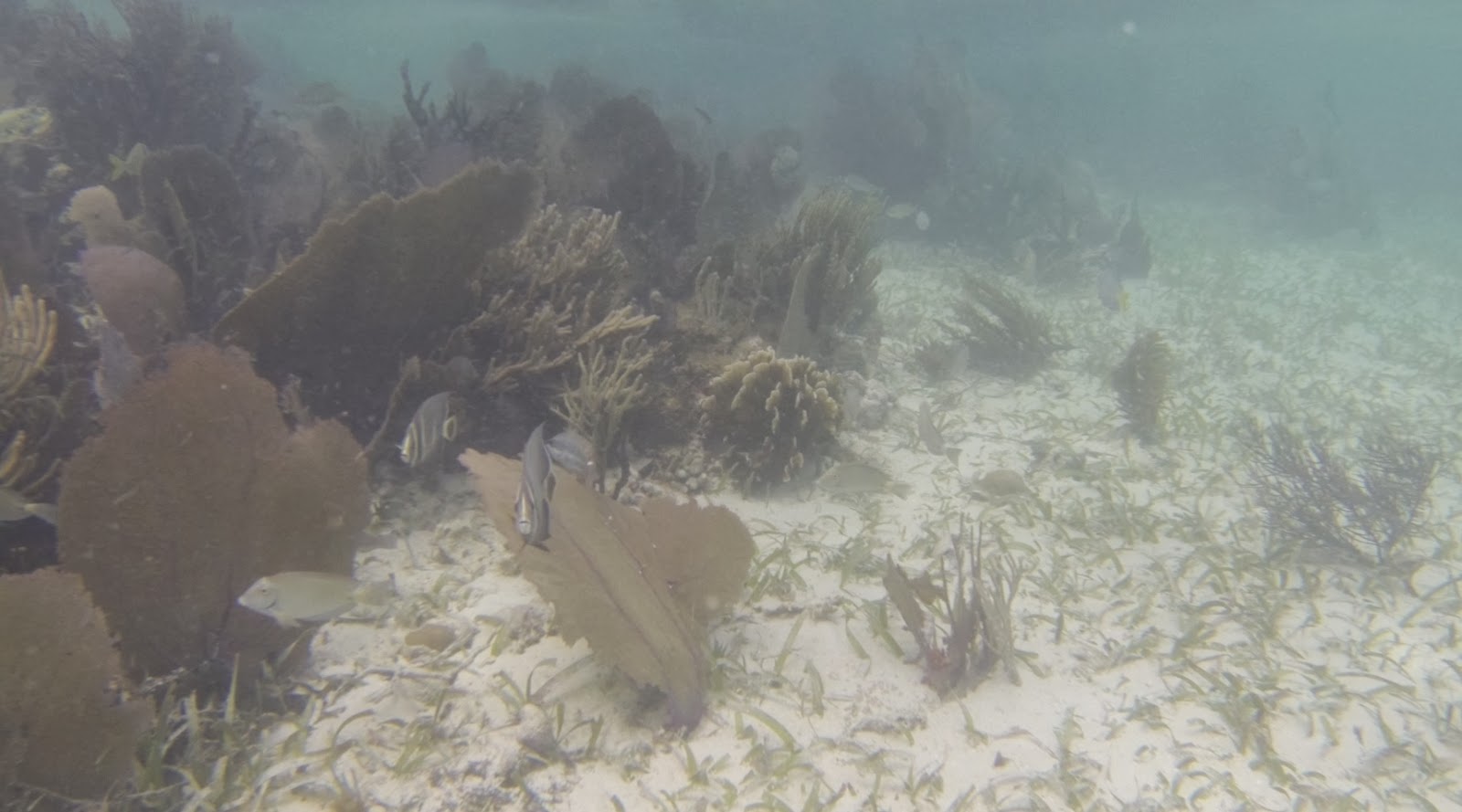 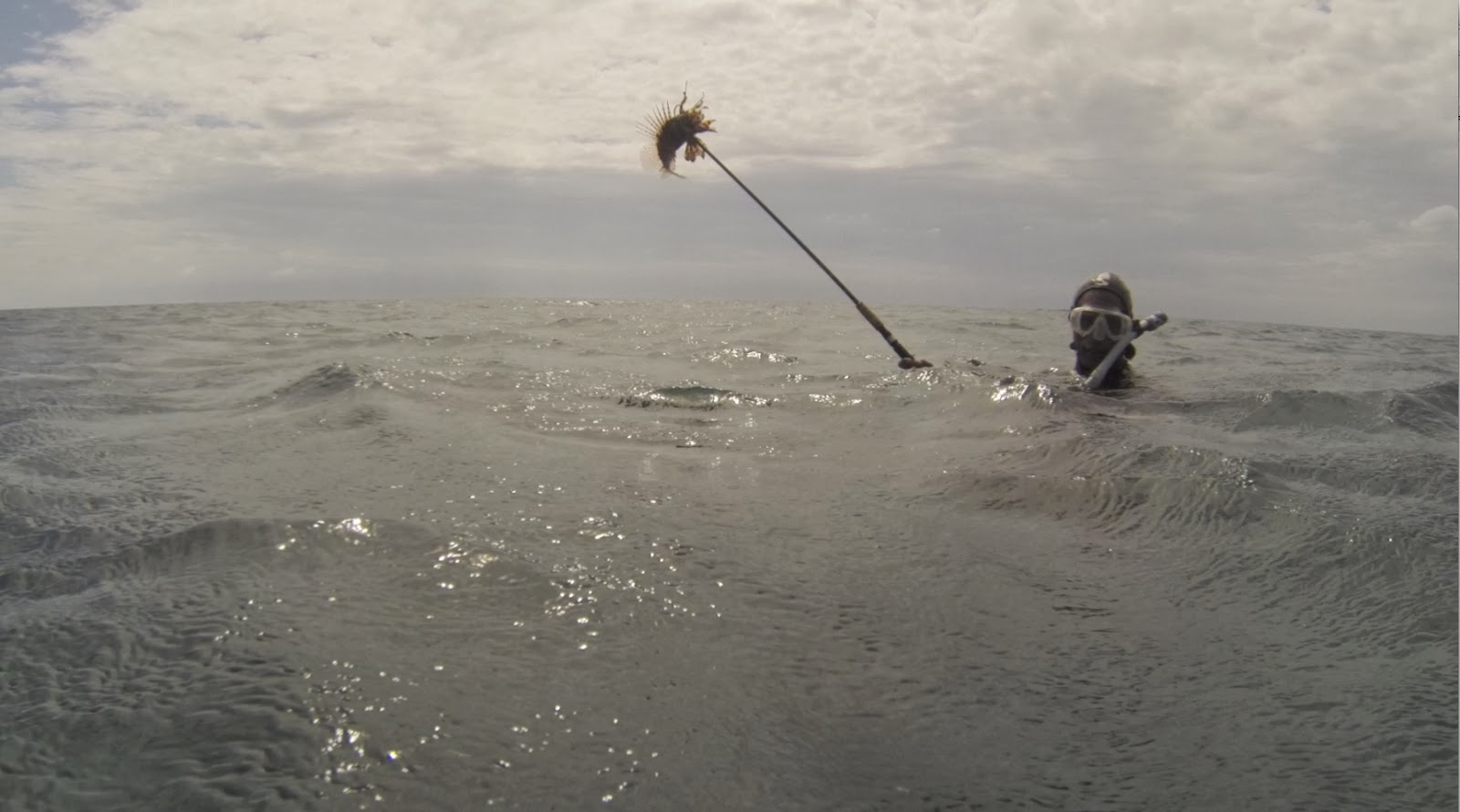 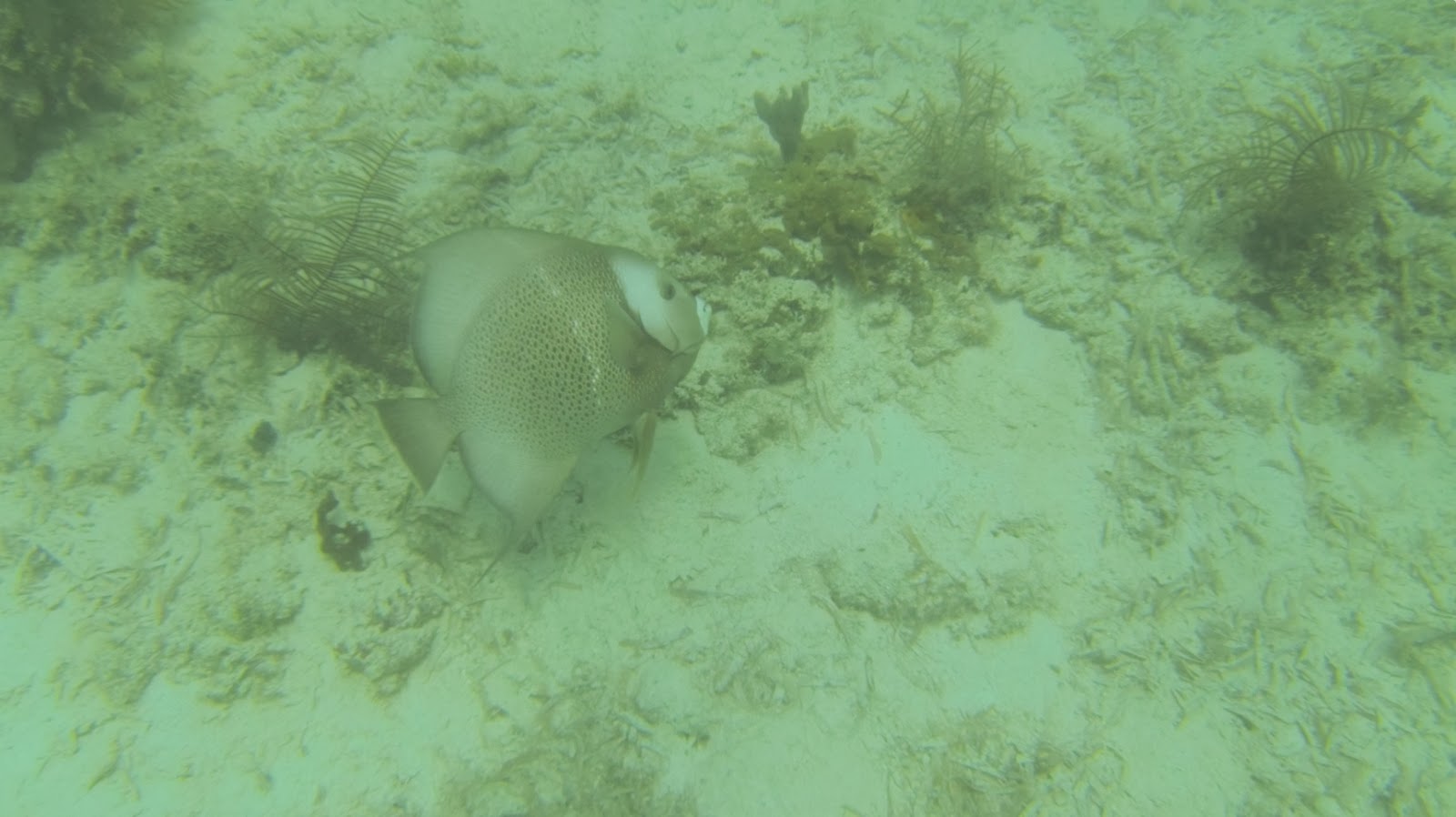 After snorkeling we tried our hand at fishing.  Marty and his dad caught a few, but Luckie and Marlin caught the most.  You could tell who the experts were. :) 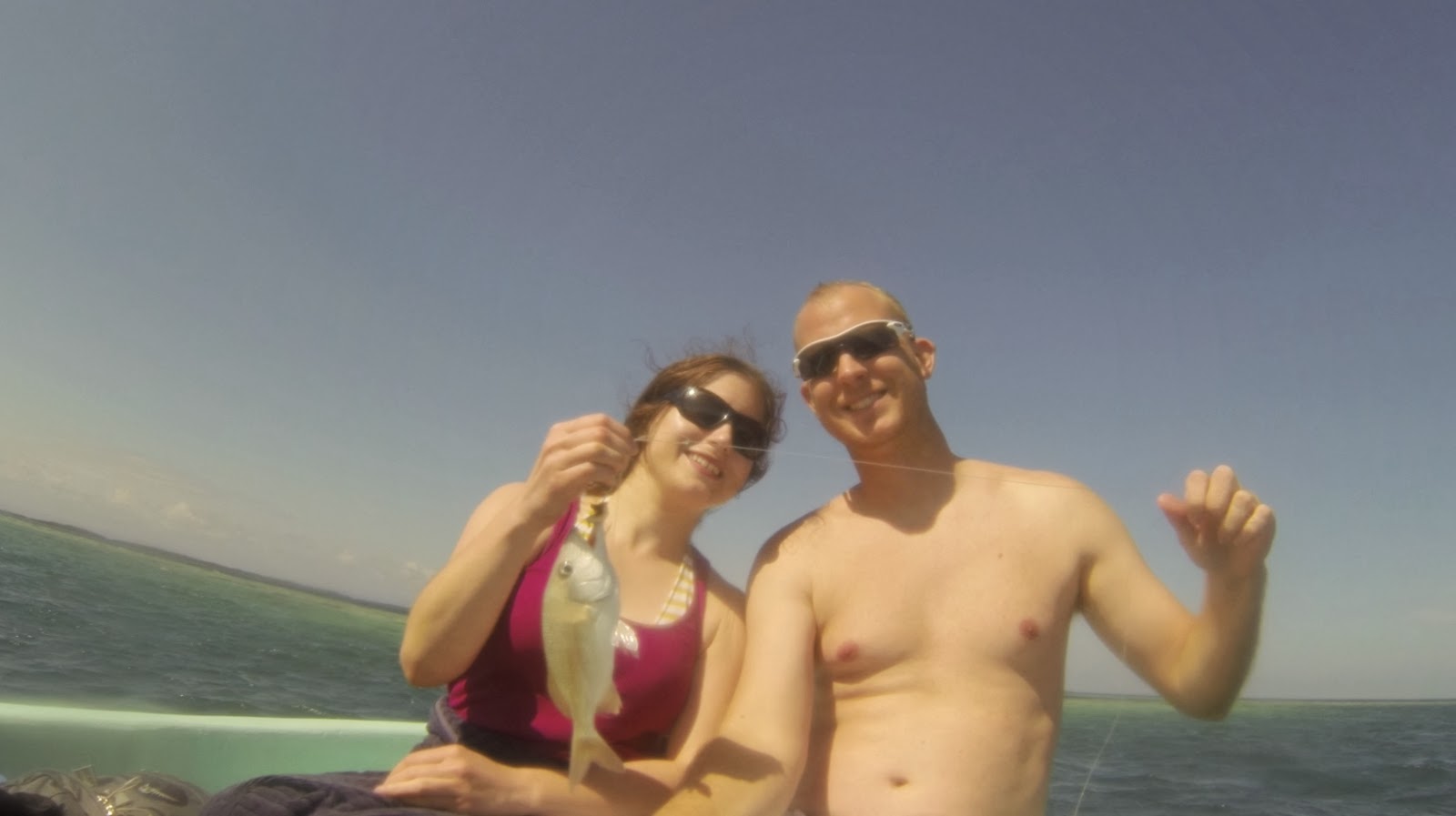 There were these crazy birds that kept circling the boat hoping for some fish scraps.  Occasionally Luckie would throw some up to them if he caught a fish that was too small.  We also threw the remaining bait fish to them once we had caught enough fish.  It was cool to see.  The video kind of shows you how crazy they were.


Next, we headed over to a small island called Bread and Butter.  A man from Minnesota bought that and another island about 7 years ago for only $26,000.  I couldn't believe how cheap it was!  He said that the island was in worse shape back then, but after adding some more sand and barriers, it looked great.  He was finishing up a couple guest houses that he hoped would bring tourists out to visit his little island.  We cooked the fish there and had lunch.  It was very tasty.

The island was so beautiful!  I wanted to live there. :) 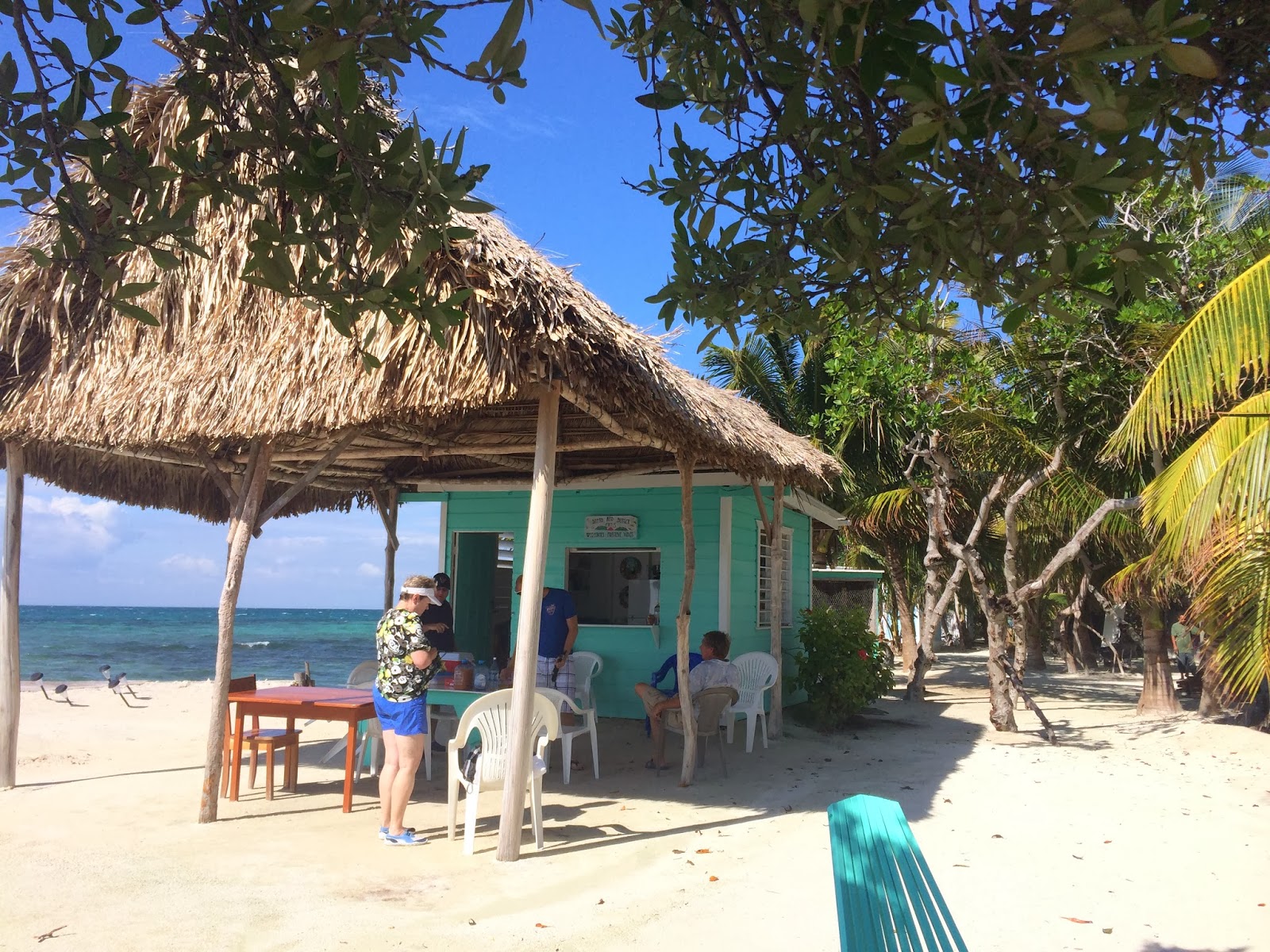 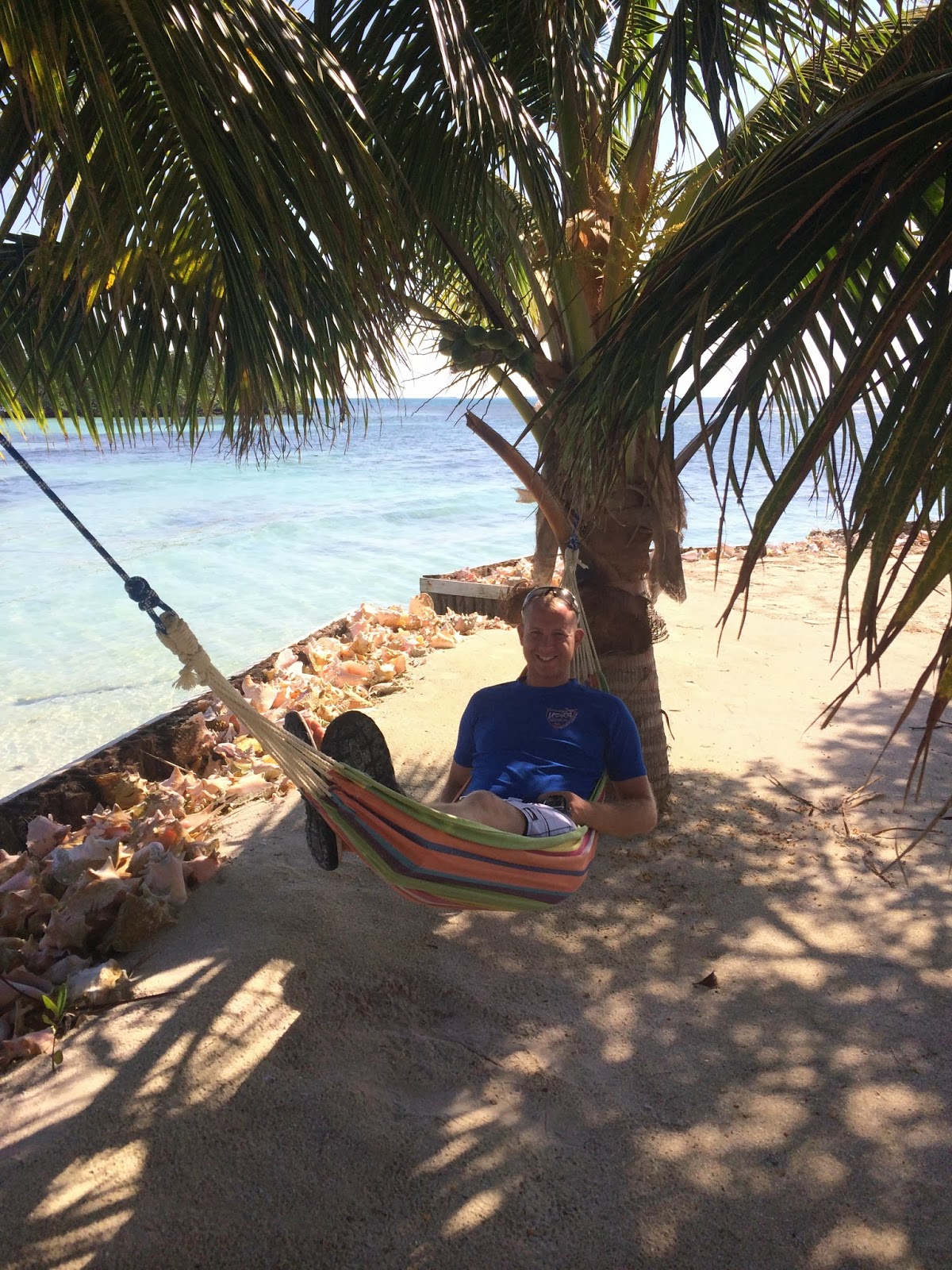 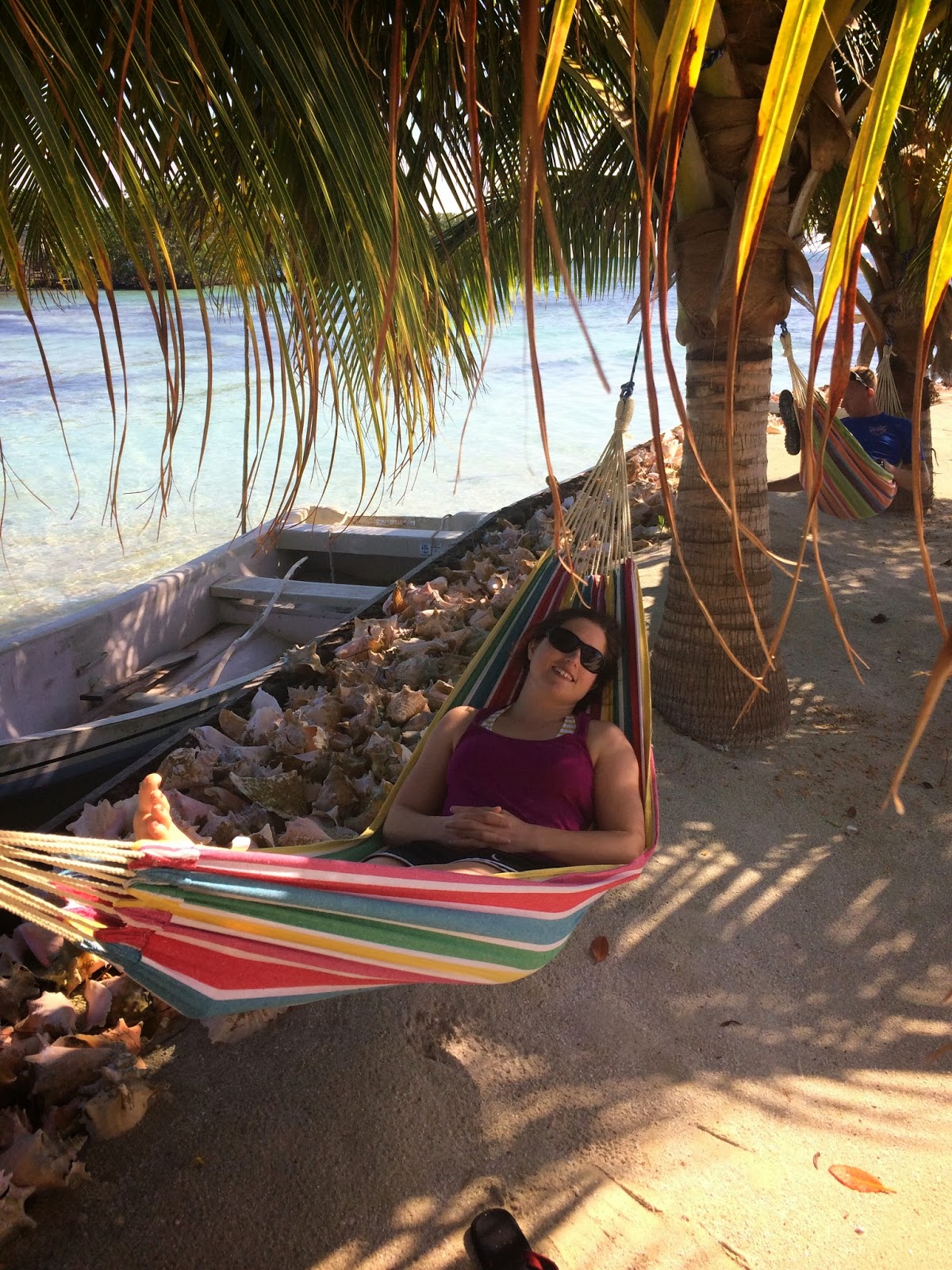 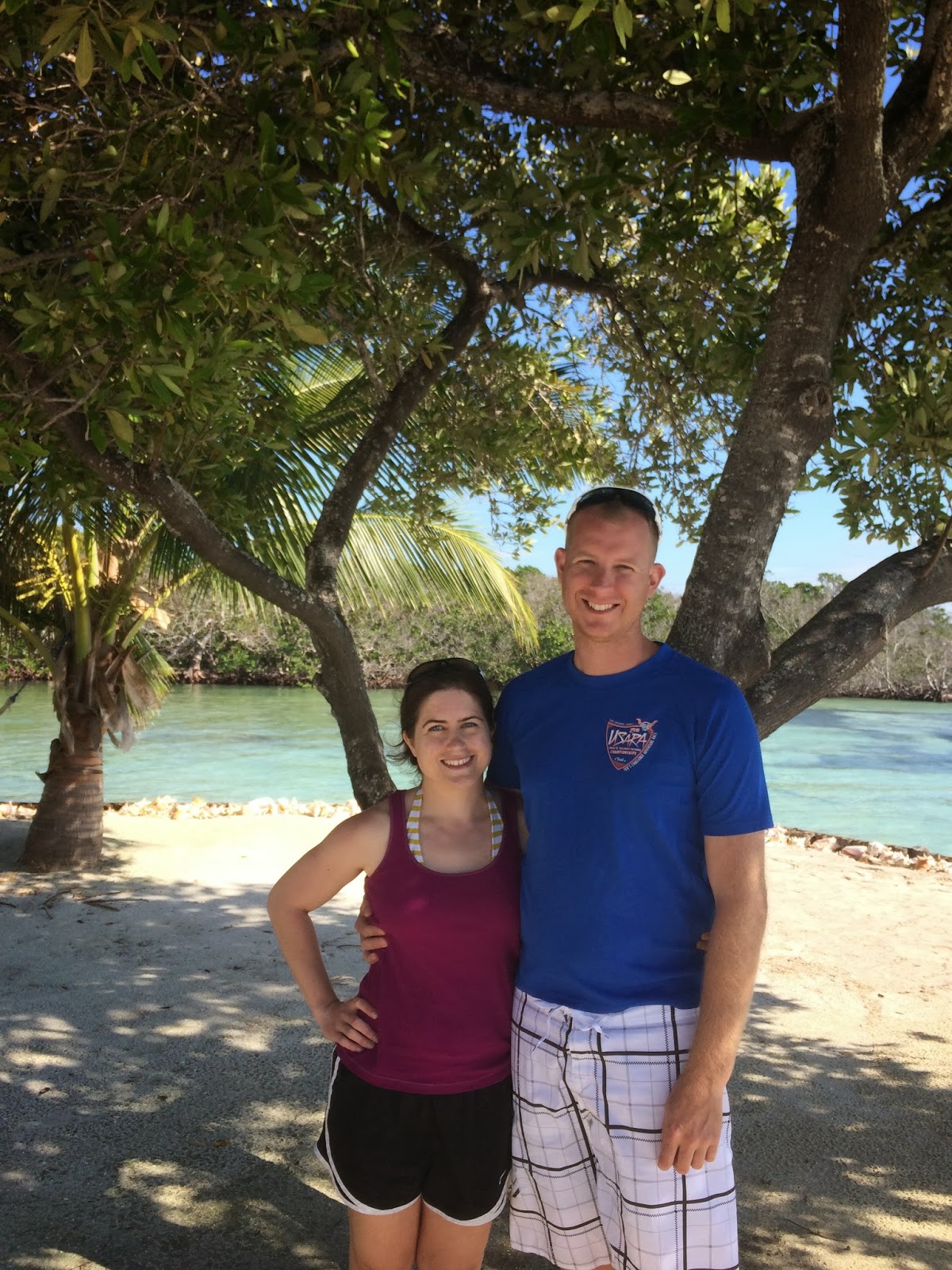 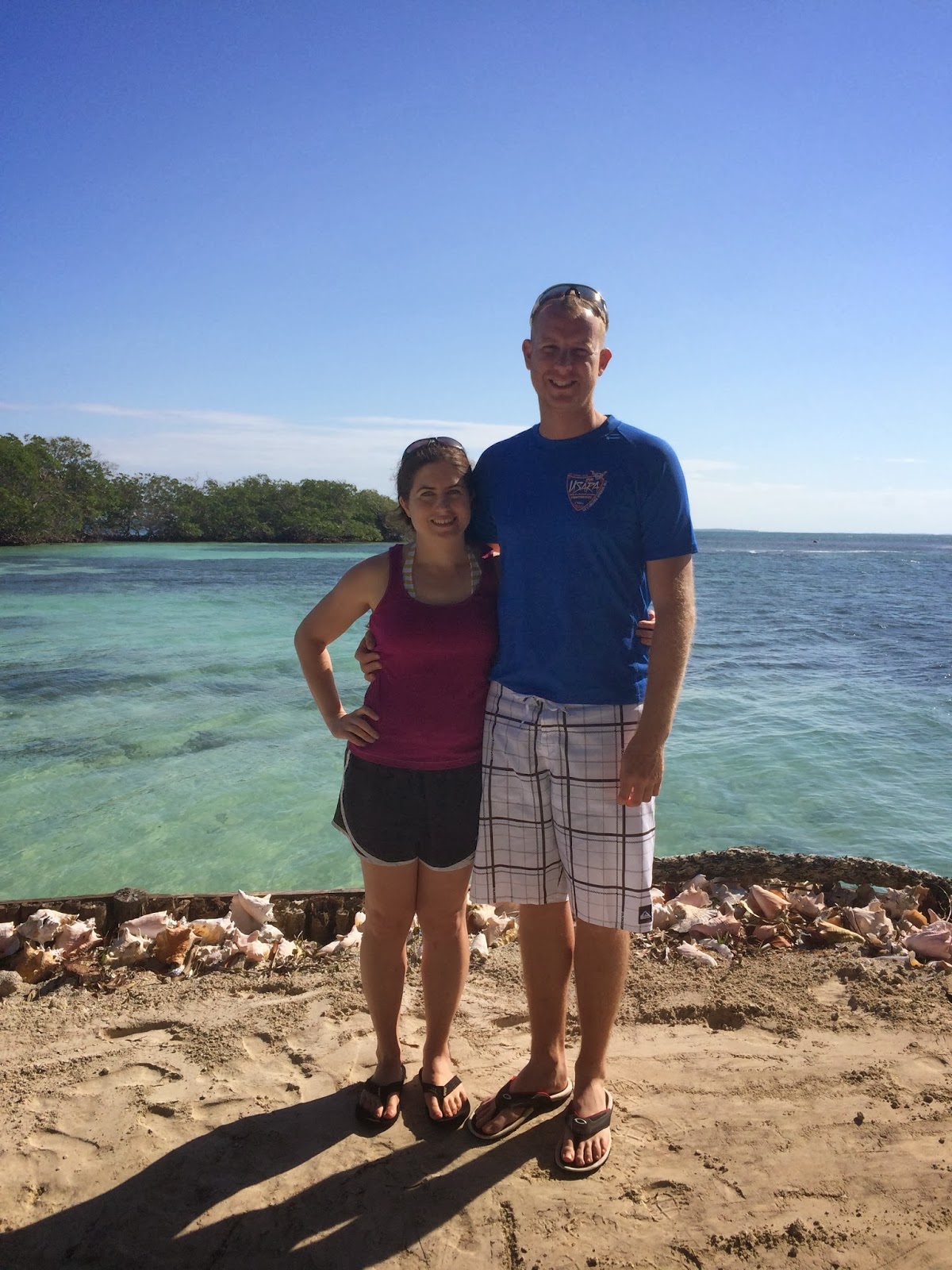 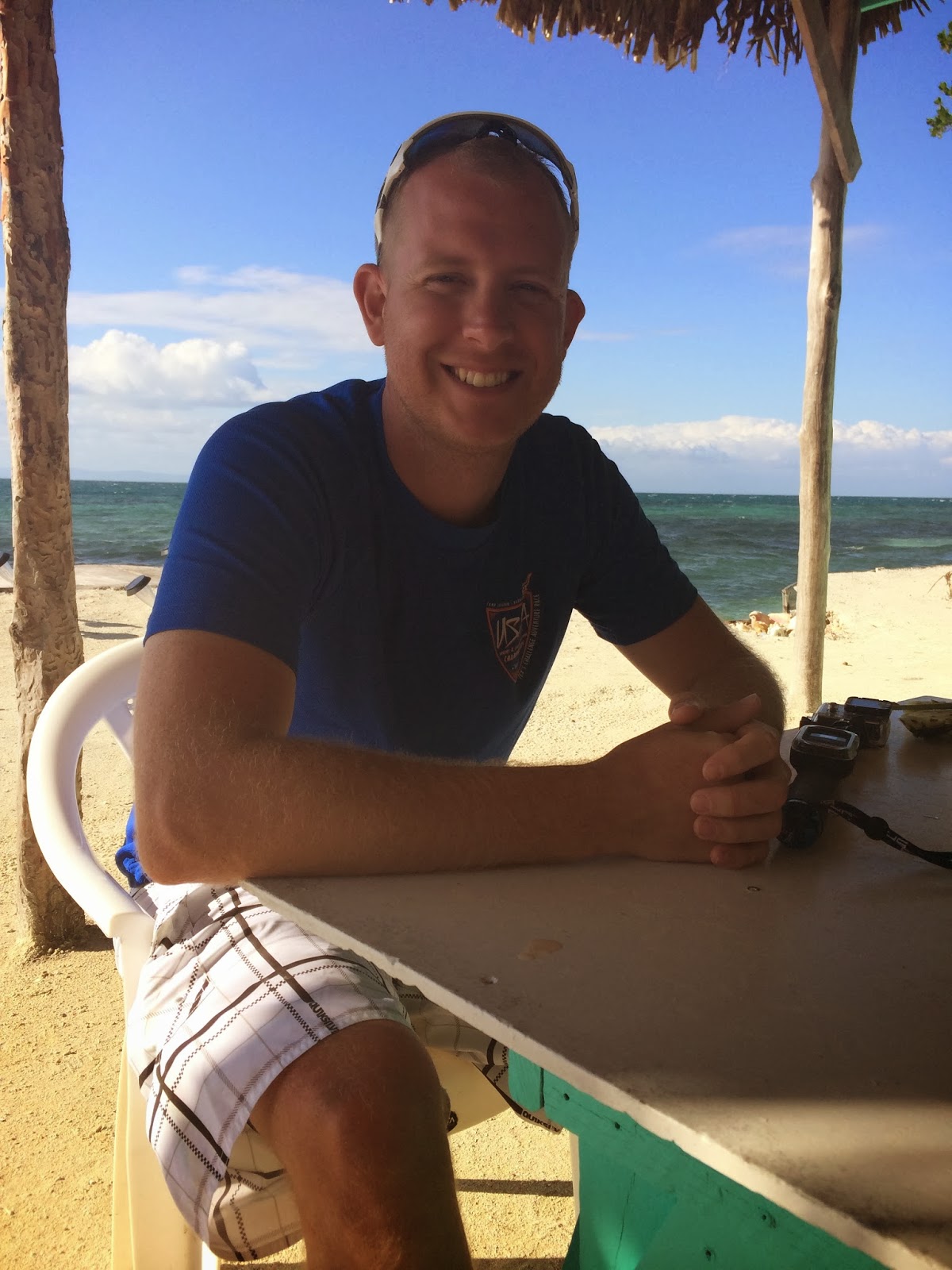 After that, we headed back to the mainland.  It was a very fun trip.  I realized when we got back that I had forgotten to put on sunscreen and that I had some red shoulders! :(  Luckily it wasn't too bad. 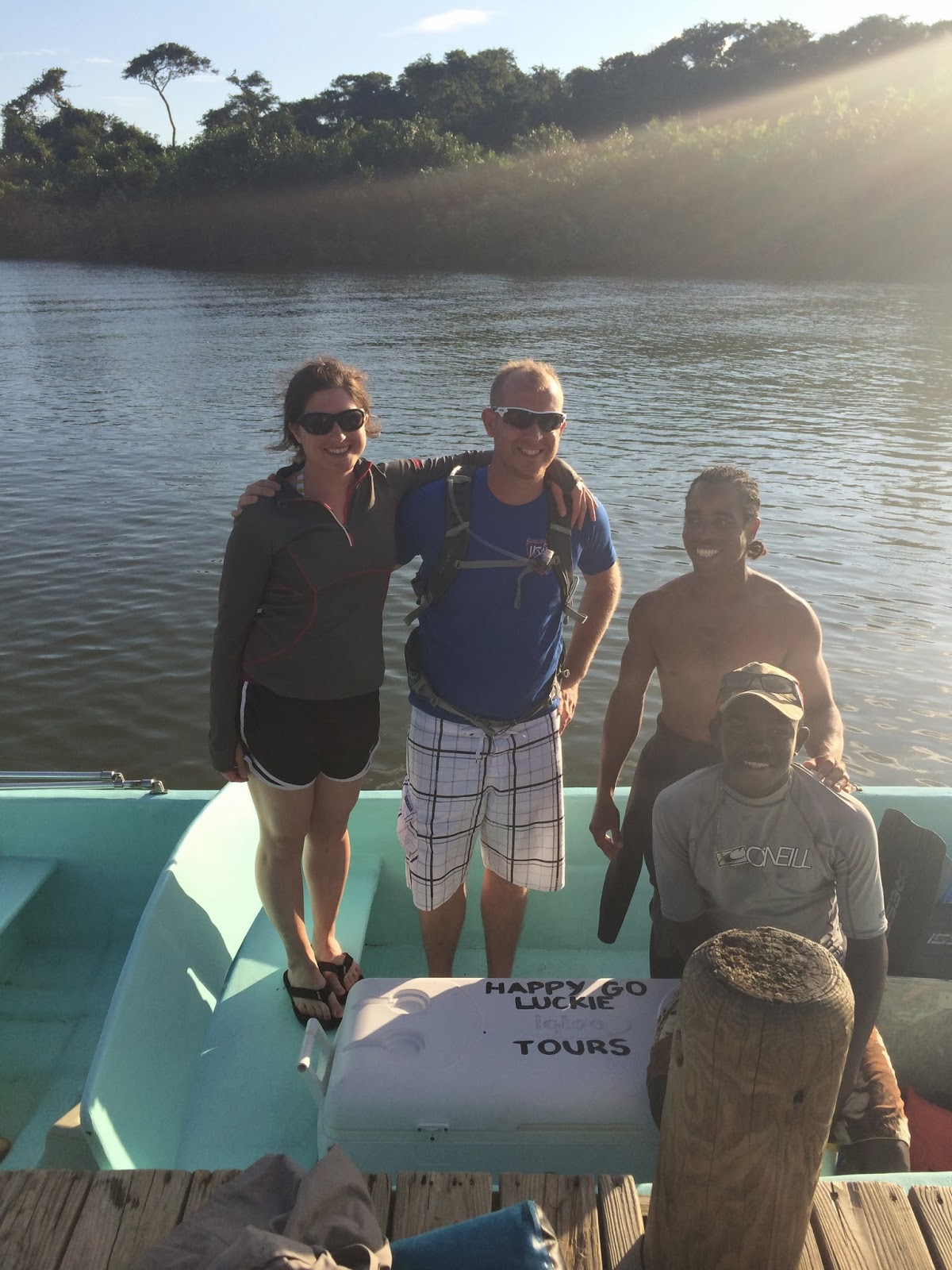 I will post part 2 in a couple days.  Thanks for reading! :) 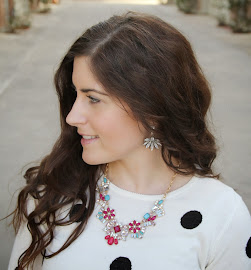